I have to admit that since the 1970s I have been fixated on pesticide contamination of tobacco cartel products and have dismissed the impact of the heavy metals that tobacco plants take up from natural soil and especially from synthetic fertilizers. I founded the Santa Fe Natural Tobacco Company and invented the American Spirit brand because of what I knew pesticides were doing to smokers.

Long before I started Santa Fe Natural I had gotten deeply into what inhaled pesticides do to human life as I saw the US government spraying Paraquat and Agent Orange on fields of Mexican Cannabis that they KNEW people were going to smoke.

Those thugs in cheap suits were and are despicable war criminals and mass murderers. Their officially sanctioned and gleefully executed crimes against “the enemy” not only affected the young people smoking poisoned marijuana – we now know that those biocides used on Mexican crops in the 70s and 80s (and still today in other countries) impacted the future children and grandchildren of those who smoked the poisoned weed with inherited genetic damage caused by the DEA assassins.

I’ve known in some detail about the phenomenon and been fascinated by the potential of using tobacco plants for phytoremediation of toxic and radioactive sites because they love radioactive heavy metals. I’ve also been aware of the heavy contamination of synthetic fertilizers with metals, but have never pursued this line of inquiry. I can’t explain the blindness.

But the shades have been lifted, Now for only the second time since the mid-1970s, and totally confirming my original data, somebody ‘Official” has tested off-the-shelf cigarettes for pesticides. New 2022 Saudi government research shows how on target my 2018 “Smoke No Evil” data was in identifying 27 pesticide contaminants in 5 brands of cigarettes, but it also shows how very wrong I was to dismiss the role of heavy metals in the genesis of the many kinds of cancer that we know occur at high rates in smokers of tobacco cartel products.

This doesn’t need a lot more lead-in or explanation. Here’s a look at data – the original data can be found in the “Supplements” section the March 2022 research paper in the journal “Inhalation Toxicology”: “Analyzing pesticides and metal(loid)s in imported tobacco to Saudi Arabia and risk assessment of inhalation exposure to certain metals”

Now here’s the conclusion regarding the concentrations of heavy metals.

“The risk assessment indicated that high cancer risks are associated with exposure to As, Cd, Cr, and Ni, while lower risks are associated with Pb. Additionally, the potential cancer risk estimated for Cr was higher than other toxic elements. The cumulative cancer risks (95%) under three different cases for all brands were greater than the permissible limits (=10−4).  The chances of getting cancer through inhalation of particulates As, Cd, Cr, Ni, and Pb was 4 in 10 000 cases in the best case scenario (1 cigarette per day). Therefore, metal content in cigarette tobacco should be reduced to improve public health.”

See that? At one cigarette a day a smoker’s chances of getting cancer are 4/1000 just from the heavy metals. Then there’s the pesticides. Just as a point of reference to the Saudi 2022 data above, here are the “Smoke No Evil” data from 2018 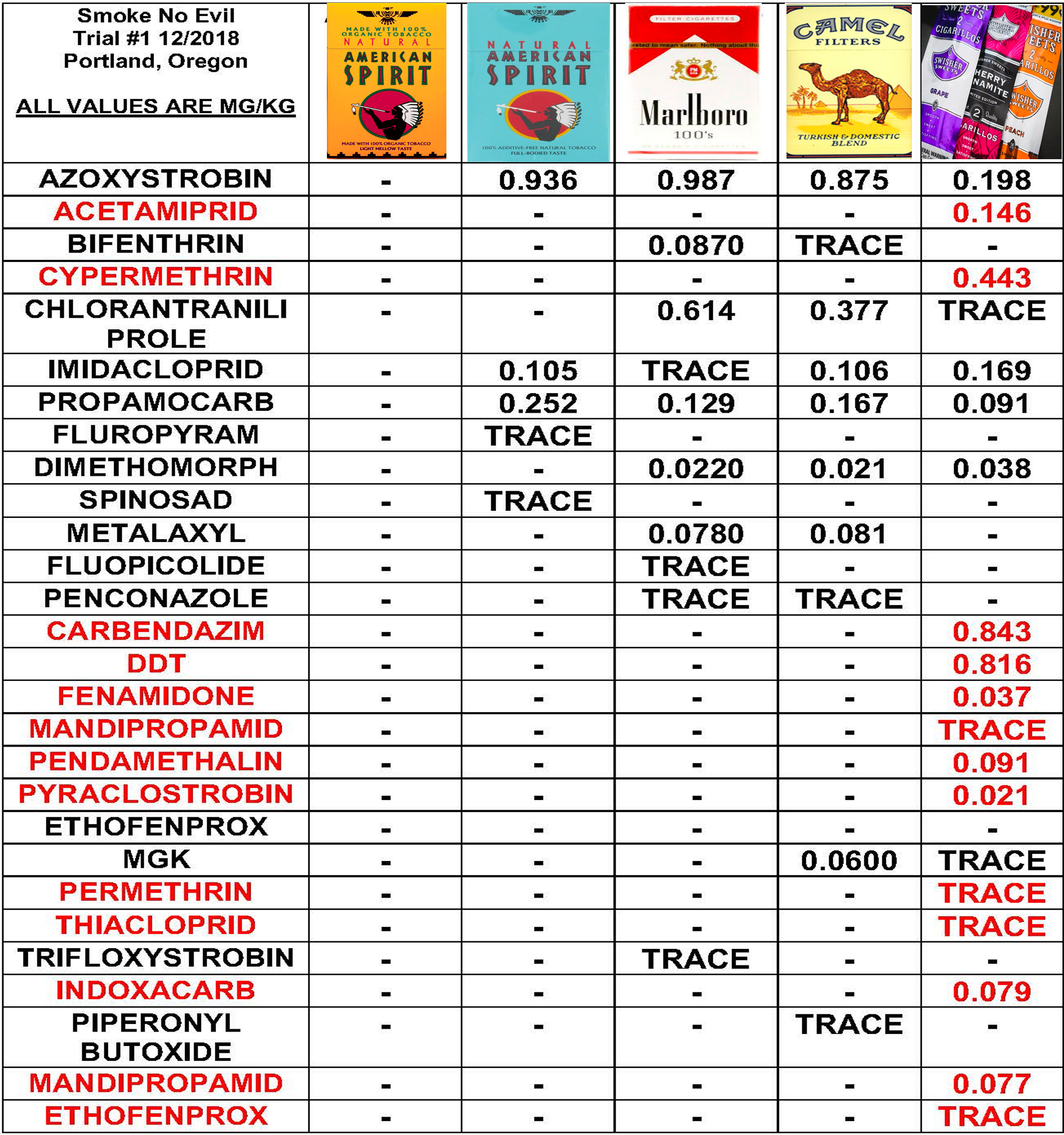 When I was a child I moved around the world with my military family, always traveling by ship in the days before aircraft could cross oceans. I would spend hours on deck writing messages, sealing them with candle wax in bottles I snagged from somewhere on board, and then consigning them to the sea knowing in my heart that they were on their way to someone, somewhere who would read them. Sometime replies arrived at my grandparents’ house years later, and they would forward them to me wherever I was living. From these contacts I developed pen-pals who I stayed in touch with for many years. I was fortunate to develop, very early in my life, a sense of the network that invisibly but seamlessly connects us all. Thank you for picking up this message in a bottle, dear reader. We are all here together. View all posts by panaceachronicles

One thought on “I Was Wrong – It’s Not Just Pesticides. Heavy Metals Are Killing Smokers Too.”