I believe published science clearly shows that there’s a very strong and maybe an undeniable connection between secret US military and ‘public health’ programs to spray southern Black communities with DDT throughout the 1940s & 1950s and today’s epidemics of obesity, breast cancer and other DDT-related diseases in those same southern communities and within the Black diaspora. This illegal, totally concealed, and undeniably genocidal DDT exposure continues today through DDT-contaminated Little Cigars marketed directly to young Black men, women – and children.

If what I will document in this post is true, then this is an atrocity that calls out not just for historical justice and accountability but for international trials of the corporate and official criminals behind these ongoing crimes against Black humanity.

Documenting an atrocity with images brings home the human suffering in ways that words cannot. Since this is the story of an atrocity against Black people in America that spans so much time and so many places, and that has so many victims both long dead and alive today, I have been struggling as a writer to find a way to tell the story with images that convey the scope of the tragedy, and I will show you what I hope are images that make you say WTF!

But let’s begin the story by showing you the connection between DDT exposure of a mother & obesity in her children:

Quite simply and tragically, the genetic damage that DDT does reaches across generations to cause obesity, diabetes and breast cancer in children and grandchildren. I’m thinking that may be the connection between Black tobacco and cotton workers being sprayed with DDT in the fields, and in their homes and churches, and in the cigarettes they smoked, and today’s obesity pandemic in the Black community. Read on and then tell me what you think.

Here’s more science that shows that the specific kinds of genetic damage caused by DDT and leading to Obesity and Diabetes crosses more than just one generation in a family:

“Observations indicate ancestral exposure to DDT can promote obesity and associated disease transgenerationally. The etiology of disease such as obesity may be in part due to environmentally induced epigenetic transgenerational inheritance.”

So now let’s look at a series of images that demonstrate graphically how the lifelong exposure of Black communities to DDT may be showing up in today’s diabetes, obesity and cancer epidemics. Please just let these images and the stories they tell sink in.

Let’s start with this faded old map by the US Army showing the range of Malaria 1934-35.

DDT was invented in the 1930s and quickly became the #1 solution for controlling Malaria epidemics in the 1940s, as it remains today in 2021. However, very early in its use it was discovered to be so dangerous to humans that it was banned for any other use but Malaria control in 1972 Even in 2021 there’s nothing like it for killing just about everything, and it is still allowed to fight the worst Malaria epidemics but only under strict UN/WHO limitations, and it is not allowed for any other use. Certainly not for spraying anything people are going to ingest.

In the period 1940-1945 the US Army was in charge of combating Malaria in the WWII South Pacific, and they already knew that DDT was dangerous, so they wanted to try it out on mass populations. Their solution was a secret program to blanket entire cities with DDT fog and then monitor the hospitals. In the huge Black neighborhoods of St. Louis the Army set up rooftop generators that blanketed these communities day and night for weeks with a DDT fog, hardly a secret to people living there but they were powerless Black people and it was wartime. The newspapers of the time hardly mention these vast rooftop DDT foggers.

The Army had doctors on its payroll to track reports of sickness and death, which continued for several years, but this entire program, which without doubt sickened and killed far more Black people than the Tuskegee experiments, and whose trans-generational impact is still being felt, has never been investigated or reported and the records were probably sanitized long ago.

The experiments weren’t confined to big cities. “Well before DDT drifted over (White) homes, however, it was sprayed inside the homes of black families in rural Georgia and Arkansas. The spraying was part of a set of federal experiments (for which little record seems to exist) upon which broader use of DDT in the war and afterward was based. An article on the Arkansas experiments describes the “field site” as a place where “ninety-five percent of the houses are of tenant or sharecropper type, shotgun-construction, newspaper lined, and inhabited by Negroes making only a marginal living.” (“DDT May Control Malaria” Science NewsLetter, Dec. 30, 1944 p. 418 – quoted in “DDT Disbelievers: Health and the New Economic Poisons in Georgia after World War II”)

As the quote from Science Newsletter shows, DDT was heavily sprayed in Black homes and communities before it was used in White communities. The science at the time is full of questions about the hazards of DDT, but the bottom line is that DDT was needed for WWII against the Japanese in the Pacific and experiments on human populations were AOK, especially if those populations were not White, just like the Japanese enemy.

So after WWII came the period of heaviest DDT use on Cotton and Tobacco crops, and in spraying for Malaria which ceased in the early 1970s – and lo and behold most of the Tobacco, Cotton and Malaria were all concentrated in heavily Black communities. During that same period it wasn’t just Black communities exposed to DDT, not are the transgenerational effects of DDT exposure limited to Black people today. Here’s one example of how pervasive DDT was in the environment – DDT infused Disney character wallpaper. Maybe this used in your Mother’s or even Grandmother’s nursery when she was a baby – to protect her, of course. But are you struggling with any of the diseases that we now know are caused by DDT exposure? I sincerely hope not, but if you are then maybe looking at a possible genetic component of your issues might be helpful.

Now let’s look at 1971, 30 years after heavy DDT spraying began first against Malaria and then on Cotton and Tobacco crops – and therefore on Black people. So where were DDT concentrations in the air heaviest? Check it out.

Like I said, on Black people in Cotton and Tobacco fields – and in Black houses, churches, schools and playgrounds.

Ok. Now let’s look at a couple of more maps. We know for sure that exposure to DDT causes Breast Cancer and Obesity in the children and grandchildren of people who are exposed.

Check out the map of childhood obesity in 2021. Could these be the grandchildren of people exposed to DDT in the 1940s-1970s? There’s more. 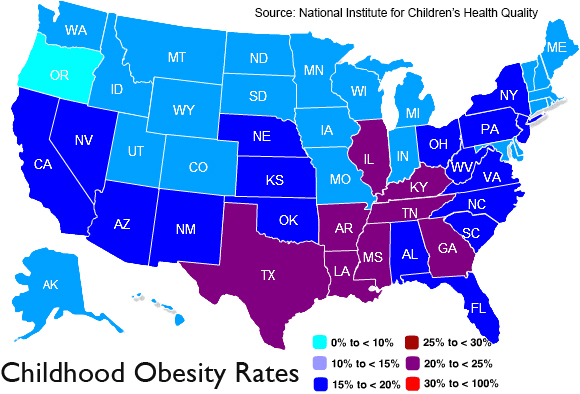 Now how about this pattern of Black women having the more aggressive kinds of Breast Cancer associated with both lifetime and genetic exposure to DDT damage. I suppose I could throw in a map showing the Black Diaspora compared with these Breast Cancer data but I’m guessing that isn’t necessary.

So far I’ve only been showing you data on environmental exposure to DDT and suggesting that the correlations between exposure of Black communities in the South and disease data are pretty striking. But there’s another side to the DDT exposure story that is far more sinister. Let me show you.

In the period 1940-1970 cigarettes were heavily contaminated with DDT. That means that people who were smoking AND who were being environmentally exposed were inhaling DDT 24/7/365. This table is from 1971.

Well, you might say, since DDT was banned worldwide in 1972 and the heavy spraying of Black communities stopped then, even if the grandchildren of those people are suffering from Obesity and Breast Cancer caused by that DDT, what can be done about it?

Well, for one thing the exposure of Black people to inhaling DDT 24/7 hasn’t stopped. Check out the DDT in among all the other genetically-damaging pesticides in Swisher Sweets – a brand heavily marketed to young Black people in their reproductive years. 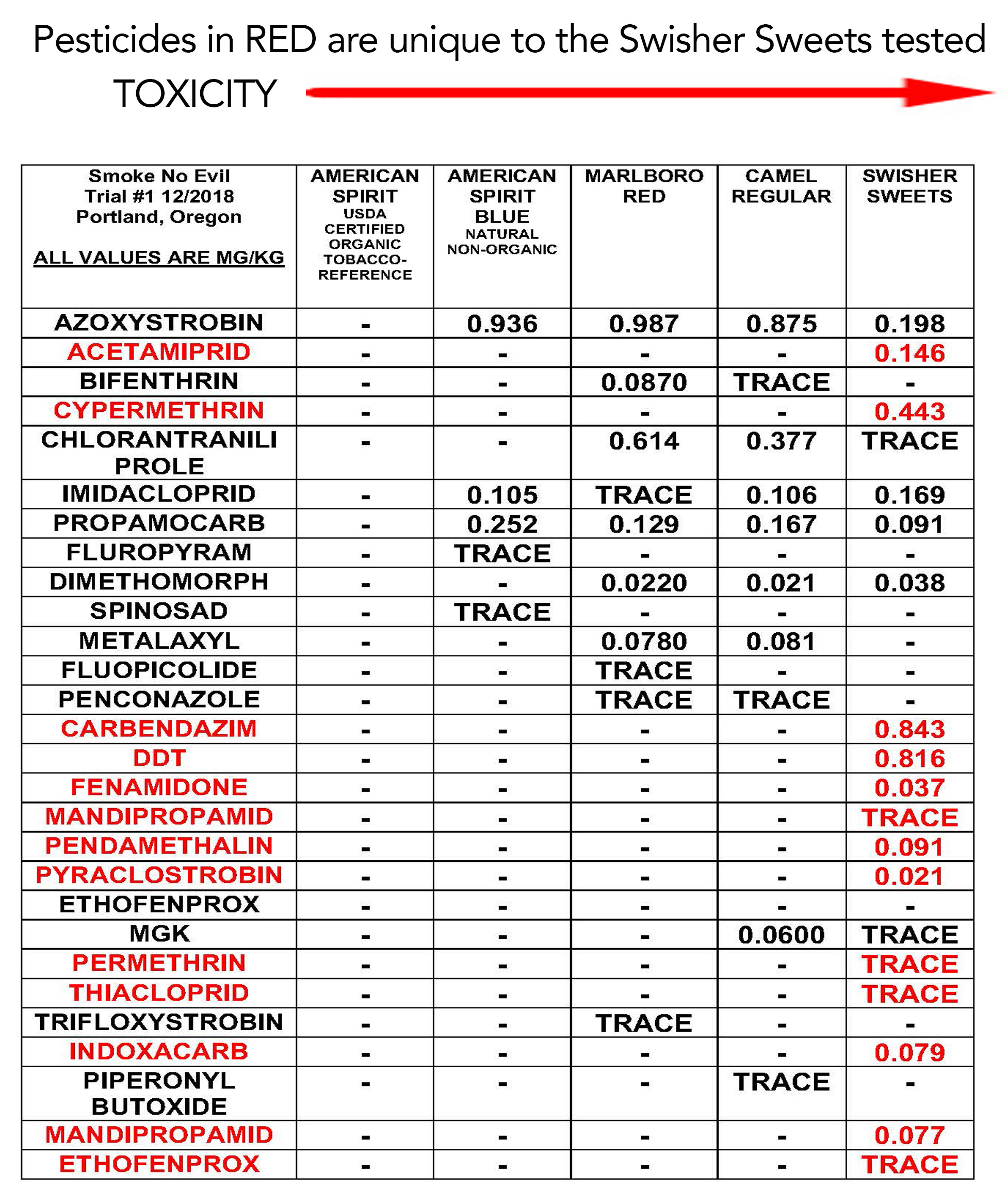 Notice that DDT? That is 700X higher than any residual DDT in any food product or water sample from anywhere in the US today. In the tobacco product of choice among young African-Americans. A tobacco product that is designed and marketed specially for young Black smokers.

When a pregnant woman is exposed to DDT during a critical time window in her female baby’s development that female baby will have 4X greater risk of developing breast cancer if she is Black or Brown-skinned. The same is true of obesity – a tiny exposure of the developing baby raises their chances of having uncontrollable obesity in their lifetime astronomically.

But it doesn’t stop there. Rather than reciting all the catastrophic consequences of this man-made DDT obesity epidemic let me leave you now with a look at all those consequences in one image and ask you – how many of these diseases are inflicted disproportionately upon Black and Brown people?

Finally, here are links to several posts with the peer-reviewed science behind every statement I’ve just made in this post – and much more.

This post offers a look at the historical origins of today’s breast cancer, diabetes and obesity epidemics in the trans-generational impact of DDT and Organochlorine pesticide contaminants in cigarettes 1950-1972, and the current state of DDT in tobacco products in 2021
https://panaceachronicles.com/2021/04/07/born-1950-1972-struggling-with-obesity-diabetes-or-breast-cancer-did-your-mother-smoke/

This post links new hard data on pesticide contaminants in cigarettes with the elevated health risks this creates for Diabetic smokers, and the simple strategy that individual smokers can use to eliminate the threat.
https://panaceachronicles.com/2020/11/17/diabetes-smoking-hidden-connection-possible-treatment/

This post links hard data on DDT in Swisher Sweets brand of little cigars, smoked by millions of young women, with peer-reviewed published research on prenatal genetic damage to the baby
https://panaceachronicles.com/2020/11/23/swisher-sweets-attack-baby-human-sonic-hedgehogs/

This post links hard data on hidden fungicides in tobacco brands popular in marginalized communities with peer-reviewed published research that demonstrates that exposure to these same fungicides is strongly associated with testicular cancer
https://panaceachronicles.com/2021/01/31/are-8-million-young-black-brown-native-men-at-high-risk-of-developing-testicular-cancer-from-concealed-ddt-in-their-swisher-sweets/

Any exposure to several of the pesticides shown to contaminate tobacco products are proven to have greater impact on babies with Latinx, African American, American Indian and Pacific Island genetics.
https://panaceachronicles.com/2020/11/09/swisher-sweets-cause-irreversible-neurological-damage-to-black-brown-babies/