As of 2011 Federal law (cited below) specifically forbids tobacco manufacturers from using pesticide contaminated tobacco that exceeds US pesticide residue standards for domestic tobacco whether that tobacco is domestic or imported. Every tobacco company, US and international, is in gross, reckless and conspiratorial violation of this law.

The law has been on the books since 2011 but apparently nobody at FDA is testing, reporting, or investigating anything. I looked hard and saw zero evidence of concern but who knows, maybe I missed something.

Since I couldn’t find any evidence that FDA was doing its job, or get any response from them when I asked, I just paid for the lab tests that FDA should be doing and am publishing data below showing that every brand we tested violates 907(a)(1)(B) of Section 907 of the Federal Food, Drug, and Cosmetic Act. These products we tested and reported to FDA in January 2019 (“Potential Tobacco Violation Report ID 19C00160“) should be re-tested on a national scale and if they are in violation they should be withdrawn and the manufacturers subjected at least to fines. I am of course holding my breath.

Here’s the core language of the Federal statute which along with the accompanying language gives any health authority at any level powers to act immediately in protection of public health and safety.

907(a)(1)(B) of Section 907 of the Federal Food, Drug, and Cosmetic Act:
(B) ADDITIONAL SPECIAL RULE. “Beginning 2 years after the date of enactment of the Family Smoking Prevention and Tobacco Control Act, a tobacco product manufacturer shall not use tobacco, including foreign grown tobacco, that contains a pesticide chemical residue that is at a level greater than is specified by any tolerance applicable under Federal law to domestically grown tobacco.”

Here is violation of the law. 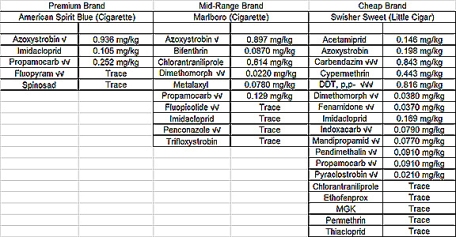 The law means no DDT (zero tolerance under US law), no Carbendazim (zero tolerance under US law), and none of about 13 others just in the little sample of tobacco products we sampled in December 2018. The tobacco material in at least one of the products – Swisher Sweets – violates this law multiple times with contaminants that are a clear and present danger to public health.

The Feds know what the industry is doing, because they wrote this law forbidding it. But they have never published one single test or as far as I can ell conducted one inspection, which means that since 2011 they haven’t prevented one single child from inhaling DDT from a Swisher Sweet their older friends bought at the bodega.

By imposing reasonable pesticide regulations based on existing, effective Cannabis pesticide limits in Oregon and other states, millions of smokers could be protected from exposure to pesticide residues in tobacco products (shown below) that are strongly associated with or in some cases proven to cause breast cancer, testicular cancer, obesity, diabetes, prostate cancer, liver cancer, childhood leukemia (ALL),  atrophied testicles, compromised immunity and ruined HIV/AIDS treatments. And there’s more, but I hope this awful list of preventable slaughter is enough to demand that 907(a)(1)(B) of Section 907 of the Federal Food, Drug, and Cosmetic Act:
(B) ADDITIONAL SPECIAL RULE. be enforced. Here is the full data

When I was a child I moved around the world with my military family, always traveling by ship in the days before aircraft could cross oceans. I would spend hours on deck writing messages, sealing them with candle wax in bottles I snagged from somewhere on board, and then consigning them to the sea knowing in my heart that they were on their way to someone, somewhere who would read them. Sometime replies arrived at my grandparents’ house years later, and they would forward them to me wherever I was living. From these contacts I developed pen-pals who I stayed in touch with for many years. I was fortunate to develop, very early in my life, a sense of the network that invisibly but seamlessly connects us all.