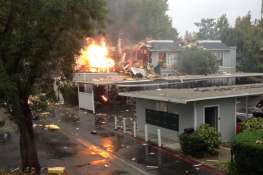 Everyone expects Meth labs to explode regularly because the process of making Meth, while simple, is inherently vulnerable to explosion because of the chemicals involved or if, as often is the case, the operator is inexperienced, careless, inattentive or stoned or, as also often happens, the equipment is poorly made or the work location is poorly vented.

But for some reason, makers of Hash Oil appear to think that they are working with a less dangerous process, or that they have more leeway to be careless or stupid, which isn’t the case – a fact testified to by dozens of hash oil facility explosions every month, especially in states where Cannabis is now legal and so there is a surplus of waste material that practically begs to be used. Squeezing the last drop of goodness out of waste Cannabis leaf is an almost irresistible temptation, and that is completely understandable.

While making hash oil safely on a large scale is absolutely possible, given the right knowledge, equipment and procedures, in this short blog I want to address the small-scale grower/maker who is equally vulnerable to deadly explosion and fire unless they are informed and careful, but who are much more often working in a basement or garage where other people, often their own children are present.

There are safe and effective ways to extract the delightful properties of Cannabis from waste leaf left over from trimming, and the internet if full of kitchen chemists and their advice. I’m writing this blog to encourage these small-scale alchemists to think twice before just googling “How To Make Hash Oil” and then following the first advice that pops up on their screen.

Like the old coach says – there’s a right way, and a wrong way to do things. Here then is a short set of illustrations of what to watch for, illustrating the range of good-to-bad advice available on the internet.

This Recipe is Safe

This excellent article offers safe method for small-batch home extraction. It is detailed and the steps are all well-illustrated, and the results should please anyone who is willing to follow the directions.

Lengthy article that reviews a lot of different methods and is full of cautionary notes that should be read and clearly understood, but given the length and complexity of the piece not everybody will come away knowing exactly how to make hash oil safely.

Safe – If You Take Precautions

This is a decent description of how to use alcohol instead of butane to make small batches of hash oil. The writer doesn’t seem to care much about the quality of the Cannabis being used, but the steps to take are well-illustrated with photos and if you follow the directions the method is safe. The key is evaporating the alcohol without an open flame and the writer’s suggestion of a rice cooker is a good one.

Here is an example of a well-meaning writer giving advice that can cause serious injury or death. Although the article has a lot of positives – it talks about using high quality organic Cannabis and being selective about the strains you choose – your first clue to the fact that the writer may not be totally safety conscious is the first photo.

He is illustrating the point that you need to work in a well-organized, clean space and the shot is of a very nice kitchen – with a four-burner gas stove! Later on, he goes into great detail about how to use a double boiler over high heat (on the stove!) to evaporate the alcohol.

There’s only one thing to say about this – alcohol fumes ignite, and they are ignited by open flames, and they can ignite explosively. This article is an excellent example of why you have to be careful where you get your advice!but

I hope that the following suggestion isn’t too self-serving, if you want dozens of safe, effective, and diverse Cannabis extraction methods explained in clear, step-by-step fashion, I believe that my 1981 book “Marijuana Foods” is probably still one of the best around. I covered dozens of natural, non-explosive extraction methods for producing Cannabis extracts for cooking medibles, and they are all safe and effective. In fact, even with all the recipes floating around today, almost 40 years later, there’s not much that wasn’t covered pretty thoroughly in this original book – the first of its kind, incidentally.

Here’s the Amazon link if you want to take a look. Note: while the cover is different from the original, the contents have not been altered. Enjoy! 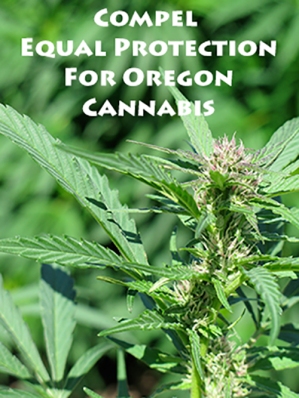 This is not just an Oregon issue. There is nowhere to hide. Nobody is safe.

Anti-Cannabis forces in other states are watching this new tactic to subvert the will of the people, and they can hardly wait to implement it themselves.

We must work together to stop this new anti-Cannabis tactic in its tracks, before it spreads and destroys what we have all worked so hard to achieve.

We can do just that, because if there has ever been a clear case of a State violating citizens’ rights that are protected by the Fourteenth Amendment, this is it.

The “Equal Protection” clause of the Fourteenth Amendment to the US Constitution has, for over a hundred years, been the foundation for compelling fair and equal treatment of citizens by powerful anti-social elements in government at all levels.

“No State shall make or enforce any law which shall abridge the privileges or immunities of citizens of the United States; nor shall any State deprive any person of life, liberty, or property, without due process of law; nor deny to any person within its jurisdiction the equal protection of the laws.”

That simple clause gives us all the legal tools we need to defeat the anti-Cannabis conspirators in Oregon, and prevent them from from spreading their poison nationwide.

I want to be clear that I don’t believe that the Oregon State Legislature is anti-Cannabis; these regulations may even be well-meaning on the part of many Oregon legislators and regulators. However, given how the anti-Cannabis forces operate across the country I strongly suspect a “back door” effort here. In either case, the threat is real, and must be addressed.

Make no mistake – these pesticide testing laws have nothing to do with protecting peoples’ health, and everything to do with destroying the Cannabis industry in Oregon first, and then in every other state where Cannabis has defeated the forces of darkness.

Of course, nobody can doubt that ethical Cannabis growers want to do everything they can to ensure the health, safety and well-being of people who use their beautiful flowers for medical reasons or for pure pleasure. There is also no doubt that Cannabis growers can be self-regulating with regard to quality, just like the wine industry that is the model for so many businesses in this new field.

But the regulations currently being forced on Cannabis growers by the State of Oregon go far beyond what is necessary to promote health and safety, and the fact that they are imposed on Cannabis growers who are for the greatest part ethical, caring people, but not on an industry that is notorious for literally killing millions of people worldwide with its contaminated, poisonous products, cannot be tolerated or ignored.

By imposing pesticide testing on Cannabis growers but not on “Big Tobacco”, Oregon clearly violates the “Equal Protection” clause of the Fourteenth Amendment. These discriminatory, anti-Cannabis laws hurt everyone in the community – Cannabis producers, Medical Cannabis patients, Recreational Cannabis smokers, physicians and clinics, dispensaries and retailers.

The State of Oregon must be forced to grant “Equal Protection” to the Cannabis Industry immediately before further irreversible harm and damage is done.

I believe strongly that the State of Oregon will never be willing (or able) to impose pesticide testing requirements on the Tobacco industry comparable to what they have imposed on the Cannabis industry, and so because of the legal pressure that can be brought to compel the State to apply the “Equal Protection” clause, they will back off of the Cannabis industry and agree that self-regulation is more fair than broad, compulsory testing, and is an equally effective model for Oregon. If we can accomplish this in Oregon, other states will follow.

We can only do this once we have demonstrated that Tobacco products are contaminated with far more dangerous pesticide and agri-chemical residues than the relatively minor issues found so far with some Cannabis growers. At that point the State will have a clear choice, and Cannabis industry self-regulation will become the clear choice for Oregon legislators.

We Can Do This By Working Together!

We can compel Oregon to comply with the “Equal Protection” clause through legal action, and to accept that there are other, better, voluntary ways for the Oregon Cannabis industry to act together to ensure the health and well-being of the entire Oregon Cannabis community. I am hearing from readers that a solution that they would prefer is for the Oregon Legislature to put in place a properly funded provision that would enable Cannabis growers to voluntarily submit samples for testing and at the same time certify that they have not used any pesticides in growing their crop. This would earn them a provisional OK to go ahead with selling the crop, which could then be certified when testing was completed. Better yet, some suggest, would be for the Legislature to put a surcharge on the entire industry, from grower to consumer, which would be used to pay for all testing rather than imposing the costs just on growers.

The full plan & the strategy for the successful defeat of these obscene laws are explained in detail on a Go Fund Me campaign set up to enable me to work with Oregon growers to make this happen.

Please help to end this travesty in Oregon before it does irreparable harm to the Oregon Cannabis community, and before it spreads like a cancer to other states. You can bet that the anti-Cannabis forces in all those states are watching Oregon carefully, and salivating.

You can also donate right here, without bothering to read the full story on my Go Fund Me website. Every penny will go to this fight. Thank you!