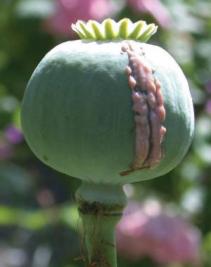 I’ve been reading old Opium manuscripts in order to find out what life was like in the 17th=18th centuries when Opium was simply a fact of life in the world at the time. In fact, in those days Opium was considered a miracle drug whose benefits far outweighted a slight downside. The potential for abuse was there, and it was recognized. But while these early manuscripts reveal a world that was full of health problems, social and economic problems, and problems with crime and corruption – they do not reveal a society that saw an opium problem. 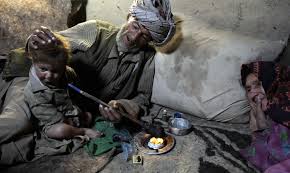 While it is clear that there were Opium addicts in almost every country, which in most cases didn’t create a problem, in some countries like China and southeast Asia there was a segment of the population that was massively addicted to cheap, adulterated opium, called Dross. This is the equivalent of the large numbers of people who smoke Basuco, the garbage from toxic Cocaine production processes.

Not much Opium Dross made it to Europe in the first Century or more of Britain’s familiarity with Indian Opium and the continental flow of Opium from the Middle East into Europe and Russia. Opium Dross was primarily a 19th Century phenomenon in the West – until then most Opium users demanded and received a better quality.

I’m planning a series of posts around this topic, and wanted to begin with an excerpt from a very early book by an English physician as he enumerates the qualities of the moderate opium experience in which the Opium is ingested, not smoked.

(Excerpted Chapters from): The Mysteries Of Opium Revealed
By Dr. John Jones, 1700
Chancellor of Landass, a Member of the College of Physicians in London, and formerly Fellow of the Jesus College in Oxford

Who
1. Gives an account of the Name, Make, Choice Effects etc. Of Opium;
2. Proves all former Opinions of its Operation to be Mere Chimera;
3. Demonstrates what its TRUE Cause is by which he Easily and Mechanically explains all (even its most mysterious effects);
4. Shews its Noxious Principle, and how to separate it, thereby rendering it a Safe and Noble Panacea; whereof:
5. He shows the Palliative and Curative use.

1. The moderate dose in ordinary use, to produce the following effects, is one to three grains, (more or less) according to circumstances, Condition, Case, Constitution, Age etc. of the person who takes it.

Class One: The Constant effects of Opium, Used Internally In A Moderate Dose

1. It causes a most agreeable, pleasant and charming sensation about the region of the stomach, which, if one lies or sits still, diffuses itself in a kind of indefinite manner, seizing one not unlike the gentle sweet delirium that we find upon our entrance into a most agreeable slumber which, upon yielding to it, generally ends in sleep. But if the person keeps himself in action, discourse, or business it seems ( especially when given in a morning, after a moderate rest at night) like a most extraordinary and delicious refreshment of the spirits upon very good news, or any other great cause of joy, as the sight of a dearly beloved person thought to have been lost at sea, or the like, causing such a pleasant ovation of the spirits, serenity, etc. as we find after a competent measure of generous “Wine ad Hilaritatem” (as men used to say).

It is indeed so unexpectedly fine and sweet a pleasure that it is very difficult for me to describe, or any to conceive it, but such as actually feel it; for ‘tis as if a good genius possessed or informed a man; therefore people do commonly call it a heavenly condition, as if no worldly pleasure was to be compared with it.

It has been compared (not without good cause) to a permanent gentle degree of that pleasure which modesty forbids the naming of; and ‘tis well worth a remark, that both are pleasures of the same sense, viz., that of “feeling”, for it cannot be a pleasure of any other sense, since it is internal.

2. It causes a brisk, gay and good humor: nor do I doubt but it has this effect upon the sleeping person, as far as their condition is capable of observing it; for you shall have them often tell of pleasant dreams after it, when they remember them, and speak of any.

3. It causes promptitude, serenity, alacrity, and expeditiousness in dispatching and managing of business. To which end, and that of a good and gay humor (which are near of kind) is commonly taken in the morning in the Eastern countries, with most certain effect.

The truth of which Wedelius is forces to confess, though quite contrary to his hypothesis of Opium’s fixing and coagulating the spirits, giving an instance of “ a certain serene person who when she had any affair of any great moment to dispatch did (beforehand) take Opium with great advantage, for she found herself in every way better disposed for business, and more enabled to bear the fatigue thereof.”

Many other authors confirm the truth of these effects but (above all) the constant experience of the Eastern nations, puts it all out of doubt.

4. It causes assurance, ovation of the spirits, courage, contempt of danger, and magnanimity, much after the manner that generous wine does, instead of which the Turks etc. use Opium before engagements, desperate attacks, etc. (as it is most notorious) to make them courageous, which it certainly does. Historians also add that when the Great Turk makes a considerable war, the soldiers buy up all or most of the Opium, which may be worth a merchant’s observation, for it thereupon grows dear, and is much cheaper in times of peace.

5. It prevents and takes away grief, fear, anxiety, peevishness, fretfulness, etc. These are necessary consequences of the former effects.

6. It causes euphoria, or easy undergoing of all labors, journeys etc., and that far beyond wines and hot cordials or spirits; therefore it is very much used in Turkey and the Eastern countries in laborious undertakings, great journeys, etc. which men perform by the help of Opium, after a prodigious and almost incredible manner. But the matter of fact is so common and usual that there is no place of doubt; besides, that some who tried it among us, have found it so.

7. It lulls, soothes and (as it were) charms the mind with satisfaction, acquiescence, contentment, equanimity, etc. How could it fail to cause these effects, since it causes all of the former gay, pleasant and brave humours?

Dr. Willis, and others, having no true experience or knowledge of Opium imagined that it causes courage, bravery, equanimity, etc. by stupefying the senses, brain etc. and making people inadvertent, dull, and inapprehensive; which is a GREAT MISTAKE, and a groundless conceit, for it is a most certain truth (which millions can affirm) that it produces those effects by an ovation and pleasure of the sensitive soul and spirits, as generous wine does before men become fuddled or are overcome with it. How else could they at the same time be more serene, and apt for the management of any business, and neat dispatch of affairs, as it is most certain they are? These fundamental mistakes about Opium have been (as you will find hereafter) one great cause why its operations have puzzled and baffled all enquirers.

8. It quiets, allays, and composes all perturbations and commotions of the spirits ( or sensitive soul), blood, humours etc. as in hysterical cases, fevers that proceed from passions, as anger, grief, terrors etc; from violent motion, labor, heat, journeys, convulsions etc. or from pain; and stops bleedings that proceed from such commotions.
9. It causes a relaxation of all the sensible parts of the body, as the membranous and nervous: this is notorious by its effects, as causing perspiration, sweat, relaxation of sphincters, dilation of the pupil of the eye, relaxation of the cornea, and all other effects of relaxation, as you’ll find more particularly hereafter.

10. It causes indolence, or exemption from pain ( as all know and allow) and that when sleep does not intervene.

11. It stops, moderates, cures or palliates all fluzes, excepting those by the pores, or such as depend (as that does) upon relaxation, as when sphincters are weak or paralytical; but these last are unnatural accidents.

13. It prevents shivering in Ague fits and such-like cases, if given time and quantity, which shall be shown in the curative section of this book.

14. It prevents and cures colds.

15. It causes a larger and slower pulse, supposing no accidental cause to the contrary.

16. It causes dryness of the mouth.

17. It has most effect in warm and moist weather.

18, It has most effect upon lax and fine-textured persons as women, children, etc, therefore women use it in Turkey and the other Eastern countries where it is also commonly used by men.

19. It causes an efflorescence of the skin, barring accidents of cold, etc.

20. It is observed by all that it mainly effects the Genus Nervosum, and animal spirits, and not the blood and humours.

21. It increases seed in some measure.

22. It causes a great promptitude to venery, erections etc. especially if the dose be larger than ordinary; which I would not have men believe without experimenting it; not that I fear to be confuted but less any should injure themselves by too great a dose.

This is one great cause (if not the chief) why the infidels of Turkey and the eastern nations (especially where Polygamy is allowed, as among the Turks, etc.) use Opium so much, it never failing to produce this effect in hale and healthy people, if the dose be sufficient; as it is too notorious in all (or most) countries from Greece to Japan inclusively, who use Opium for that end.

It does ( I confess) look like a riddle, that a most relaxing and stupefying medicament, which takes away the sense of feeling (and consequently irritations to venery, as one would think) should notwithstanding irritate thereunto causing erections etc. however it is most certain, tho a seeming contradiction, of which sort you have many more among the effects of Opium.