If we allow our imaginations to drift forward a few years it’s possible to envision a time when the health benefits of pure, natural Coca Leaf are so widely understood that there will be strong voices calling for this natural medicine to be legalized just like Medical Cannabis is today.

One source of opposition that will have to be dealt with in the case of legal Coca Leaf that isn’t present with legal Medical Cannabis is an 8000# Gorilla named the Coca Cola Company. (With my apologies for the analogy to all Gorillas everywhere.)

You see, this clan of billionaire hucksters believe that they own the word “Coca” when it comes to naming beverages and a wide range of other types of products, and they have literally an army of lawyers and (no doubt) heavily bribed government officials to help them enforce their grip on the concept. 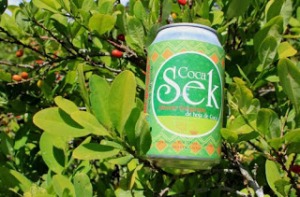 An excellent case in point is what happened in 2012/13 to s small group of visionary entrepreneurs in Venezuela when they tried to produce a bottled Coca Leaf drink as part of their natural foods restaurant and health spa operation in Caracas. They began by working with a group of indigenous people in Colombia, who are able to grow Coca plants legally as part of their cultural heritage, and developed a carbonated Coca leaf drink named “CocaSek” that took off quickly and soon became quite popular. Nothing on a grand scale, but these young people had a following for their restaurant and for their natural healing center as well as for their “CocaSek” product.

“The Coca Tea Company is an artisan company (cottage industry) located in Caracas, Venezuela which imports, distributes and manufactures teas, infusions and other products made from the coca leaf including coca flour, coca candy, coca liquor, culinary sauces and other products. Our company imports its products directly from Peru, Bolivia and Ecuador.”

The first hint they had of trouble was that their bottling company – the only one in Colombia – told them that they would no longer be able to bottle their product for them. No explanation – just “Sorry”. Or actually, “Tough Shit.”

So, according to the group’s website they pulled an end run and found a bottling plant in Bolivia that would produce their CocaSek product in 12 ounce cans. They were pretty happy about this because even though Bolivia was further away than Colombia the regulatory authorities were much friendlier and the use of cans instead of glass bottles actually reduced transportation costs a bit in spite of the greater distance.

Unbeknownst to them the Coca Cola Company was not happy that they had failed to strangle the young company by cutting off its bottling resource in Colombia so the gloves quickly came off to reveal the fist of steel. Within a short time the folks producing CocaSek found themselves facing hostile, aggressive hitmen sent from Atlanta not with guns but with briefcases, and very soon they found that all avenues for selling their CocaSek product were closed to them.

The story I am telling here is explained in far greater detail on their own website, which looks like it has been dormant since 2013 but which still offers visitors an astounding set of information resources, especially on their blog which also appears to be inactive.

When you do spend time on their website you’ll find some of the best analysis ever written of the cozy relationship between the Coca Cola Company and the successive US government agencies tasked with criminalizing drugs – the Bureau of Narcotics, then the Bureau of Narcotics & Dangerous Drugs, and now the DEA. David Wright, one of the company founders, is a brilliant researcher who – unlike so many researchers these days – understood that sometimes you have to go and dig through physical records to track down the trail of the bad guys. David spent lots of time at the National Archives and at a university where Harry Anslinger’s memorabilia are archived. David has published original photographs and scans of reams of correspondence between top government officials and top Coca Cola Company representatives that shows unequivocally that Coca Cola did ( and does) have the US government doing its dirty work throughout the hemisphere.

Actually, come to think about it, that was probably more the reason that Coca Cola Company went after little CocaSek than any real concerns over trademark infringement. How dare David Wright make these records public? Well, he did, and the world owes him a great big thank you. If there was ever any doubt, now we know.

From a distance it looks like the Coca Cola Company must have succeeded in killing off this innovative little product before it could gain a foothold in the market. Of course the Coca Cola Company does this all the time. Anyone who tries to develop any kind of product with the word Coca as part of the product name will quickly be paid a visit but the suits from Atlanta. (In fact I kind of wonder where the thugs in suits are now that I’ve published “The Coca Leaf Papers”.)

But the point of this post is to say that somehow the worldwide grip that the Coca Cola Company has on the word “Coca” is going to have to be broken before Coca Leaf medicinal products can be developed and marketed.

However, as an interesting aside, the government of Peru produces and markets a nice line of Coca products – teas, tonics, and other medicinal and nutritional products with brand names like “Mate de Coca” and we don’t see the Coca Cola Company interfering with these products at all. Could that be because the company depends on the importation of a huge tonnage of Coca Leaf from Peru every year in order to make its “secret formula”? So they will cut deals and keep hands off when their own interests are at stake but will fall on and crush anyone not protected by the power of the state.

It seems to me that this highly selective enforcement of their trademark and copyright interests in the word “Coca” might create a legal opening if there were legal minds astute enough to make the case that “Coca” cannot be owned by a company that is only a hundred or so years old when the word itself goes back thousands of years and is, among other things, the name of one of the most important spiritual beings among the peoples of the Andes.

I hope that the people behind the Coca Leaf Tea Company somehow manage to get out from under the claws and fangs of Coca Cola and find a way to begin producing CocaSek again, but given the terrible economic crisis now gripping Venezuela life must be very difficult. I am keeping my eye out for a book being written by one of the company’s founders David Wright – details can be found on the company website.

I encourage readers of this blog to visit the company’s website and find a way to send messages of encouragement to this band of courageous spiritual pioneers.