Please pardon the strange title – it’s just that these things are all connected in ways that I think may be important and I am pretty sure are being completely overlooked most importantly by people who smoke cigarettes or little cigars and are trying to recover from drug addiction or drinking, or maybe just trying to quit cigarettes.

I’ve been looking at a lot of journal-published toxicology research on pesticide exposure and its neurological and developmental consequences and I’m connecting some dots here that may point to a hidden issue that is particularly affecting alcoholics, addicts, and people in rehab and recovery.

Here are some of the dots I’m connecting – what do you think?

So (1) almost all addicts, alcoholics and people in rehab/recovery are inhaling insecticides and fungicides hundreds of times a day, and (2) they are committing suicide at six times the rate of non-smoking, non-addicted, non-drinking people, and (3) chronic pesticide exposure alone, by itself, increases suicide rates dramatically.

Check out this representative small sample of the published research.

Smoking and Suicide: A Meta-Analysis

“Compared to nonsmokers, the current smokers were at higher risk of:

“There is sufficient evidence that smoking is associated with an increased risk of suicidal behaviors. Therefore, smoking is a contributing factor for suicide.”

Association Between Chronic Exposure to Pesticide and Suicide

Addiction and suicide: A review

“Suicidal behavior is a significant problem for people with co-occurring disorders seeking addiction treatment. Several predisposing and precipitating risk factors such as marital and interpersonal relationship disruption, occupational and financial stressors, recent heavy substance use and intoxication as well as a history of previous suicide attempts and sexual abuse combine in an additive fashion with personality traits and mental illnesses to intensify risk for suicidal behavior in addiction patients.”

END THIS GROUP OF LINKS

So with this research in mind, and if you’ve been connecting the dots along with me, please check out the insecticides and fungicides I found when I tested Marlboros and Swisher Sweets, among others. Remember, not one of these have been tested for their impact through inhalation, which is well-known as the most hazardous route of ingestion. Why should they? Nobody ever expected that any human being would be inhaling what you see below hundreds of times a day. Finally, please keep in mind that many of the insecticides and fungicides you see below are designed to work at the molecular level.

Literally just a couple of molecules of DDT or Carbendazim or an Azole fungicide hitting a human fetus at the wrong developmental point means high risk to virtually guaranteed genetic damage and a lifetime of potential neurological and hormonal diseases along with childhood and adult cancer and autism.

All this from just a few molecules – dose doesn’t matter with many of the newer neurochemicals, and even with the old standby DDT. A few molecules of DDT at 10-16 weeks, like if Mommy is smoking a Swisher Sweet or two a day, and that child may be severely damaged. I think I can say what the results would be of a study that looked at the children of mothers who smoked Swisher Sweets or any of the other highly contaminated “little cigars” before or during pregnancy. Swisher has been targeting young Black and Latina women for decades, so any young woman who became a SS smoker and has had a baby with health issues is very likely a victim of severe negligence at best. Such a study would help raise awareness and, if there is evidence that this harm has in fact been done, it might help bring compensation and justice to the child victims of Swisher Sweets and their DDT/Carbendazim cocktail. 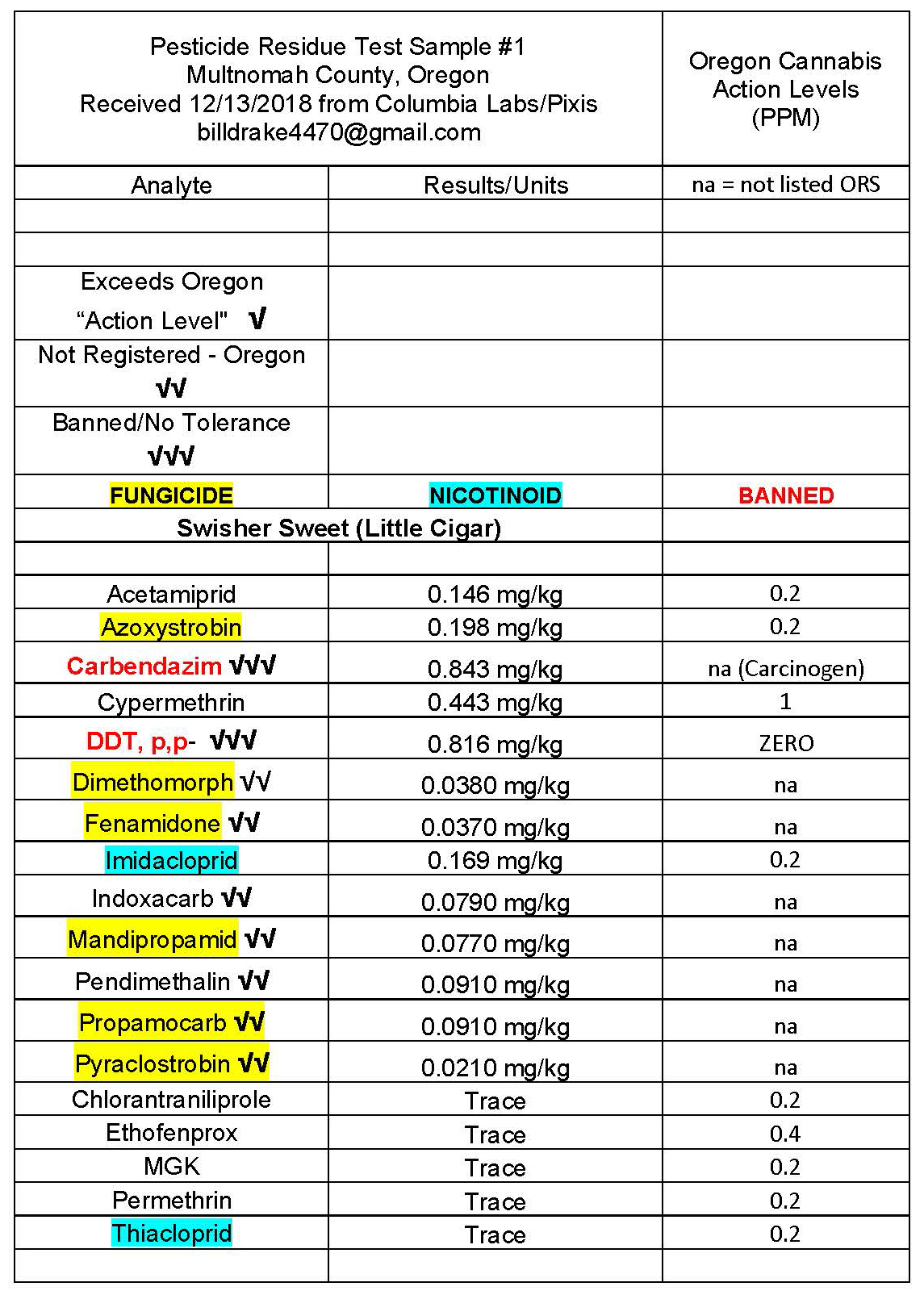 So then there’s research like this – not the only study of its kind either.

By the way I do realize that OP pesticides are not the issue in cigarettes today they were for smokers 1970-2010, who are just now beginning to suffer and die in great numbers from neurological diseases nobody is tracing to OP poisoning because they don’t live anywhere near a farm and were never exposed to OP. Except concealed in their cigarettes, known to the government and the manufacturers. hidden from doctors.

So I’m thinking – could switching to organic cigarettes make a difference, even a small one, not just in suicidal thinking and behavior but also in the underlying toxic conditions that are driving the mental and emotional suffering?

The problem is that if there’s a connection it’s being missed because nobody has ever seen a single government, medical or scientific report showing what concentrations of which pesticides are in which brands.

That’s a shame because just on an individual level it’s possible that simply switching to an organic cigarette, branded or RYO a person dealing with drugs and/or alcohol could lower their stress levels and maybe feel better just by eliminating these hidden insecticides and fungicides, without having to go through the difficult process of quitting smoking on top of drinking, addiction, rehab and sobriety.

I know in my heart that anyone who smokes who is also fighting addiction to any drug will find that their suffering is eased and their fight may become a little easier if they will just switch to organic tobacco cigarettes. No need to quit smoking- just switch and then see what happens.

Maybe nothing, or maybe you’ll feel better with just the pesticides out of your system. Maybe not having those pesticide neurochemicals interacting with your other drugs and all attacking your nervous system and hormones all at once will ease some of your pain and anxiety.

Maybe you’ll think less about hurting yourself. Maybe you’ll feel better, regardless of anything else you’re doing or not doing about drugs or drinking. Who knows? Is it worth a try? Wouldn’t that just drive some people you know crazy – seeing that you can smoke and maybe even enjoy it without hurting yourself, and maybe even make yourself feel better in the process? Then of course at the right moment you might decide to try a new idea I’m putting out there –

First, get rid of what’s really addicting you – cigarettes, not Tobacco.

It’s easy to do – lots of smokers have done it

Those “Gotta have a smoke” thoughts were never your own.

Sure, it’s addicting, just like coffee or sex or cherry pie –

You don’t have to have it, but you like it.

You’ll find yourself cutting down naturally, without even trying

Then you can just try not smoking at all for a day.

You’ll want to smoke, but you won’t have to.

So then OK, maybe have a smoke after dinner – that’s all.

Go with that for a while.

Next week maybe try nothing – all day and after dinner too.

You’re finding out that you’re in control.

You’re finding out that you can smoke or not,

When you want and if you want.

You’re free from cigarettes, and the hook, and the Tobacco Cartel